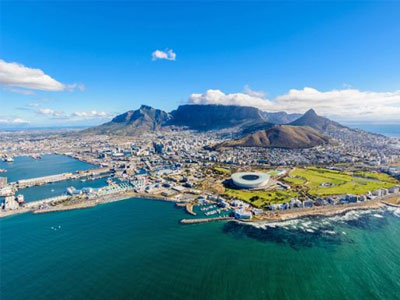 South Africa is a country on the southernmost tip of the African continent, marked by several distinct ecosystems. Cape Town is a port city on South Africa’s southwest coast, on a peninsula beneath the imposing Table Mountain . Slowly rotating cable cars climb to the mountain’s flat top, from which there are sweeping views of the city, the busy harbor and boats heading for Robben Island, the notorious prison that once held Nelson Mandela, which is now a living museum. One of Africa’s premier vacation destinations , Sun City in South Africa is internationally recognized for its superb resort offering of hotels , attractions and world class events . Johannesburg , more commonly known as Joberg is a rapidly changing and the vibrant heart of South Africa.