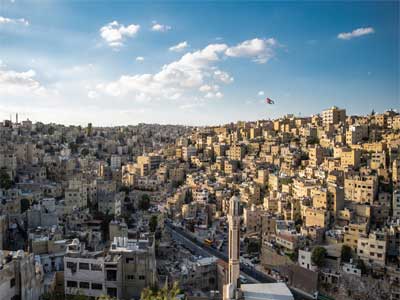 Jordan, an Arab nation on the east bank of the Jordan River, is defined by ancient monuments, nature reserves and seaside resorts. It’s home to the famed archaeological site of Petra, the Nabatean capital dating to around 300 B.C.E. Set in a narrow valley with tombs, temples and monuments carved into the surrounding pink sandstone cliffs.
Petra is one of the world’s richest and largest archaeological sites set in a dominating red sandstone landscape.
Amman, the capital of Jordan, is a modern city with numerous ancient ruins. Atop Jabal al-Qala’a hill, the historic Citadel includes the pillars of the Roman Temple of Hercules and the 8th-century Umayyad Palace complex, known for its grand dome.
Aqaba has a well-developed infrastructure and is accessible by road, sea, or air, in turn facilitating doing business with and exporting to nearby countries Selected as the Arab Tourism Capital for 2011, Aqaba is the destination for hundreds of thousands of tourists from across the globe. The Dead Sea – bordering Israel, the West Bank and Jordan – is a salt lake whose banks are more than 400m below sea level, the lowest point on dry land. Its famously hyper saline water makes floating easy, and its mineral-rich black mud is used for therapeutic and cosmetic treatments at area resorts. The surrounding desert offers many oases and historic sites.