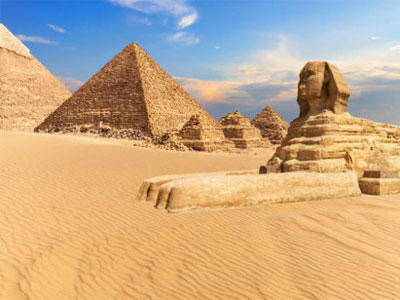 Egypt, a country linking northeast Africa with the Middle East, dates to the time of the pharaohs. Millennia-old monuments still sit along the fertile Nile River Valley, including the colossal Pyramids and Sphinx at Giza and the hieroglyph-lined Karnak Temple and Valley of the Kings tombs in Luxor. The capital, Cairo, is home to Ottoman landmarks such as Muhammad Ali Mosque.

The coast along the Red Sea has a rugged desert beauty above the waterline– rewarding to explore on a multiday outing to one of the globe’s great dives or on an afternoon’s snorkeling jaunt along a coral wall. There is just as much space and beauty in Egypt’s vast deserts. Whether you’re watching the sun rise between the beautiful shapes of the White Desert or the shimmering horizon from the comfort of a hot spring in Siwa Oasis, Egypt’s landscapes are endlessly fascinating.