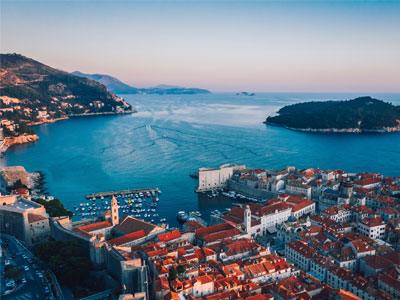 is an Eastern European country with a long coastline on the Adriatic Sea. Encompassing more than a thousand islands, it’s also crossed by the Dinaric Alps. Croatia has an unusual shape (similar to a croissant) that is unlike any other country in the world, which comes as a result of five centuries of expansion by the Ottoman (Turkish) empire towards Central Europe.
Its inland capital, Zagreb, is distinguished by its medieval Gornji Grad and diverse museums. Split, a town is known for its beaches and the fotress. Within its white stone walls and under its courtyards are a cathedral and numerous shops, bars, cafes, hotels and houses. Dubrovnik is a city in southern Croatia fronting the Adriatic Sea. It’s known for its distinctive Old Town, encircled with massive stone walls completed in the 16th century. Its well-preserved buildings range from baroque St. Blaise Church to Renaissance Sponza Palace and Gothic Rector’s Palace, now a history museum.
Split is the second largest city in Croatia, and is the largest city on the Adriatic coast. With excellent transport connections by bus, sea, air and train, it’s easy to travel to and from the city – it is deservedly becoming a destination in its own right.
There are some fantastic sights in the city, both Roman and more modern, excellent options for dining, drinking and nightlife, plenty of beach opportunities and lots of choice for those wanting day trips. Split is much loved by visitors these days!